Some species of speedwells are native to the U.S., while others have been introduced and naturalized from Europe. Found throughout the eastern half of the United States except the extreme South; found north into Canada from Newfoundland to Ontario.

Common speedwell is a perennial, reproducing by seed and by slender underground rhizomes. It flowers from May to July.

Common speedwell is found in pastures, open woodlands, and old fields; mostly on gravelly or stony acid soils. It is often a problem weed in lawns during spring and summer.

Common speedwell (Figure 1) is distinguished by its very slender stems, small leaves and small bluish-white flowers. The stems are almost horizontal, much branched, hairy and root at the nodes (a). The leaves are small (1.0 to 2.4 in. long, 0.4 to 1.2 in. wide), opposite, hairy and toothed. The light blue flowers are held on short, dense spikes arising from axils of the opposite leaves. The main part of the flower (corolla) is 0.2 to 0.24 in. across (b); the seed pods are small, flat, broadly heart-shaped and are about 0.16 in. across (c). The seed is about 0.04 in. long, flattened, oval and yellow (d).

Corn speedwell (Veronica arvensis L.) is an annual. It can be differentiated from common speedwell by the following characteristics (Figure 2): erect stems (a), spreading from the base; lowermost leaves opposite with short stalks, middle ones stalkless, ovate or elliptic, upper leaves alternate (1 per node), smaller, narrower, without teeth (b), each with a blue-violet flower in its axil (c, d). 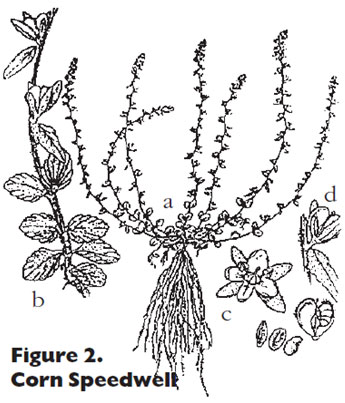 Purslane speedwell (Veronica peregrina L.) is an annual and can also be a weed in lawns and gardens (Figure 3). This species also has erect stems, simple or branching from the base (a). The stems and leaves are either smooth or with fine, sticky hair, with a somewhat “fleshy” texture. Lower and middle leaves are opposite, oblong or linear, smooth or irregularly toothed (b), lower ones short-stalked, middle and upper ones stalkless; upper leaves alternate, smaller and narrower, each with a white flower in its axil (c). 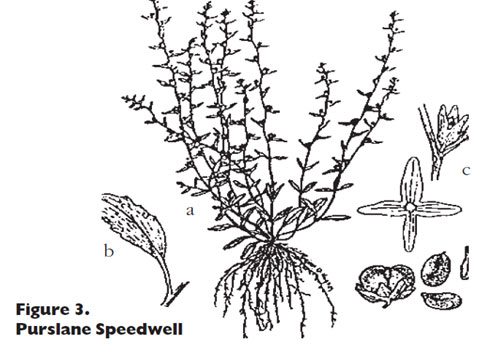 As with many other weeds, maintaining a dense, healthy and vigorous lawn is the best method of controlling speedwells. The use of adapted species of grass, adequate fertilization, proper mowing and irrigation practices, and insect and disease control is the best way to minimize problems. Low nitrogen fertility may result in high speedwell populations due to less competition from desirable turfgrass species. Mowing as soon as the first flower-heads appear can reduce further infestations.

Speedwells can be controlled by specific broadleaf weed herbicides. Annual speedwell species can be controlled with preemergence products. Combination herbicides that include triclopyr and dicamba are especially effective for postemergence control. Postemergence herbicides may be applied to speedwells in spring or fall, provided that the plants are actively growing. The lawn should not be mowed for two or three days before or after herbicide application. The treatment application should be done at a time when there is no rainfall forecast for at least 24 hours.

For a details on current herbicides registered for control of speedwells, refer to the latest edition of the Professional Guide for IPM in Turf for Massachusetts.