Evapotranspiration (ET) is the sum total of water lost to the atmosphere due to evaporation from the soil surface and transpirational losses from leaf surfaces. If irrigation is withheld during periods when evapotranspiration rates (output) exceed the precipitation/irrigation rate (input), turfgrass shoot growth rates are reduced along with verdure (shoot biomass), shoot density, chlorophyll content (green color), and shoot moisture content.

Determining When to Water and How Much

A good visual indicator that turfgrass wilt is imminent is the length of time required for footprints to disappear after walking on the turf. In addition, some grasses such as bluegrasses (Poa species) in response to drought stress will fold their leaves to reduce transpirational water loss by reducing the amount of leaf surface area exposed to the atmosphere. These plant responses to moisture stress, however, depend on the current weather conditions and the time of day (early morning, mid-day, late afternoon). After prolonged moisture deficits and severe stress the death of some shoots (leaves) can be expected if irrigation is not applied. If water is provided at the first indication of wilt, no loss in turfgrass quality will result. However, if wilt is severe some loss in turfgrass quality can be expected. These drought stress symptoms indicate when to water, but tell you nothing about how much water to apply.

The cool-season turfgrass peak root growth period occurs in the early spring followed by a smaller peak during the early to mid fall period. Cool-season grass roots will continue to grow up to the time the soil freezes (although at a reduced level). The optimum soil temperature for cool-season root growth is 50 to 65 °F, which is 10 °F lower than the optimum air temperature for cool-season turfgrass shoots. Therefore cool-season grasses experience rapid root growth decline beginning in early summer (peaking by mid-summer) because of high soil temperature stress. As a result, drought avoidance characteristics of cool-season grasses decline during this period of accelerated root growth decline (and increasing evaporative demand). This root growth decline results in a more intense irrigation schedule (increased irrigation amounts and frequency) by mid-summer compared to early summer. Recent research has shown that irrigation frequency can affect turfgrass rooting and drought resistance. Specifically, deep, infrequent irrigation applied at the time of leaf roll (mild water stress) resulted in deeper rooting and higher turfgrass quality during drought compared to turf irrigated on a daily basis. 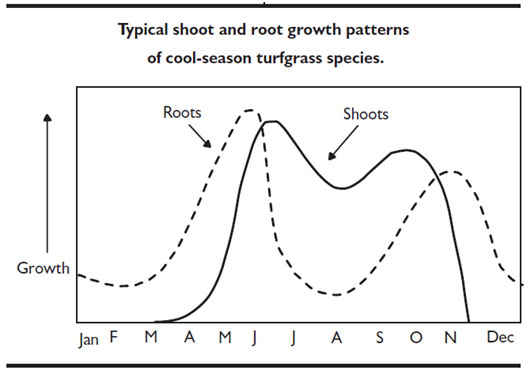