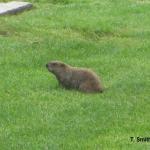 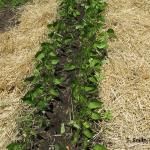 Do your vegetable plants have leaves with holes chewed in them? Are the holes big or small? Have entire plants been chewed down to the ground? Are your cucumbers and cabbages wilting? Are the leaves of beets, spinach or chard looking splotchy? Do some plants have little yellow spots? It takes some investigative work to find the culprits. The first thing to do is to look carefully at the damage and any signs left behind.

Signs and Symptoms of Insects and Slugs

If you see holes or ragged chunks of leaves disappearing and the damage has been occurring slowly, with a little feeding each night, beetles, caterpillars, earwigs or slugs may be the culprits. To distinguish among these four look for signs, or evidence, left behind.

Caterpillars leave fecal droppings under the leaves or around the damage. Droppings look like small "pellets". Some caterpillars make webbing. Damage ranges from numerous small holes in leaves, to removal of large portions of the leaf. Cutworm caterpillars feed at night on both stems and leaves. During the day look for the curled up caterpillars just under the soil surface near plant stems.

Beetles are not as likely to leave droppings and they often escape notice by falling to the ground. They fall in response to leaves being moved as you look for them. Look carefully under leaves for signs such as egg clusters and tiny larvae. Since many different species and sizes of caterpillars and beetles appear in gardens, look for information on the plant that’s being chewed to determine what insect pests are typically associated with it.

The European earwig, found in New England gardens, can damage seedling vegetables, corn silk and soft fruit. They will chew numerous holes in the leaves of many kinds of vegetable plants. Younger leaves may have holes all over the leaf and older leaves tend to be chewed around the edges. Leaves chewed by earwigs often have a ragged look.

Slugs leave a coating of slime as they feed, which dries into a shiny trail. The slime helps protect their bodies from desiccation and a residue often remains where the slug has crawled.

To investigate further, look for pests at dusk, or with a flashlight at night. Many caterpillars, beetles, and especially earwigs and slugs, feed at night and hide during the day. Handpicking caterpillars, beetles and slugs and dropping them into soapy water can be effective in home vegetable gardens. Trap earwigs in shallow cans baited with fish oil or a drop of bacon grease in vegetable oil.

If you see plants with wilted, drooping leaves or with small yellow spots, look carefully for tiny, soft-bodied insects in groups along the stems or under the leaves. Aphids, whiteflies and squash bugs have mouthparts like a microscopic straw. They feed by poking their mouthparts into a leaf or stem and sucking out nutritious plant juices. This process leaves yellow patches or spots. Aphids and whiteflies don’t grow more than about 1/8” long. Look for a sticky residue, called “honeydew” on leaves below or close to where they feed. This residue often becomes sooty with mold.

Squash bugs emerge from bronze colored eggs usually laid in clusters on the bottom surface of squash leaves. About 1/8” long, grey and soft at first, they grow into brown, hard-shelled adults nearly 3/4” in size. Aphids and whiteflies feed mostly in one place, while squash bugs move around on the plant, frequently under the leaves.

Winding, tan colored blotches on the leaves of spinach, beets and Swiss chard leaves indicate the presence of leaf miners. These tiny fly larvae tunnel between the surfaces of the leaf and leave the splotchy trails called “mines”. You can pull off the top surface of a mine and find the find the little white maggot, if it is still active. The adult fly lays its eggs on the surface of a leaf, then the larvae tunnel into the succulent insides of the leaf to feed.

Are your cabbage seedlings wilting? The cabbage root maggot fly, as well as the related onion maggot and seed corn maggot flies, lays eggs in the soil near the host plant (or seed) and the emerging larvae tunnel into the roots or seeds. Plants affected include broccoli, cabbage, cauliflower, radishes and other plants in the cabbage family, as well as onions, vine crops (cucumbers, squash, pumpkins, melons and gourds), and corn, pea and bean seeds. The adults look like small houseflies. The larvae, or maggots, do the damage by feeding and tunneling. Damage can cause wilting, poor germination, render radishes unappealing and cause onions to rot.

Cucumber seedlings that wilt, turn yellow and potentially die could be infected with a bacterial wilt disease (Erwinia tracheiphila) transferred by cucumber beetles. Look for tiny, ¼” long yellow and black striped, or black spotted yellow, beetles feeding on the young leaves of vine crops (cucurbits). Both the striped and the spotted cucumber beetle are found in Massachusetts. Their damage includes feeding on stems, leaves and roots as well as transmission of the wilt disease. Seedlings with less than five leaves are most vulnerable.

As squash plants begin producing fruit you might notice the leaves wilting. Look back along the stem from the wilted leaf for excrement, called “frass”, which looks like sawdust left by the insect feeding inside the stem. Make a lengthwise slit in the stem near the frass to look for the large, cream-colored caterpillar eating inside the stem. Remove the caterpillar, and then cover the damaged portion of the stem with several inches of soil to encourage rooting. Watch for the orange and black adult moth, which flies like a small hummingbird, hovering around squash plants during the day. The moth lays tiny, reddish brown eggs along the stems and on leaves.

Once you have diagnosed the cause of damage, consider how you will manage the problem. Depending on the amount of damage, you may choose to allow natural enemies to reduce the pest population, or to wash or pick the pests off the plants by hand. Plan to use lightweight row covers to protect crops from flies and beetles and from butterflies and moths that produce caterpillars. In many cases row covers, put in place at the time of planting, provide the best protection for seedlings of cabbage family plants and vine crops.

Some beetles and caterpillars can be managed in the vegetable garden using products containing Bacillus thuringiensis (Bt), neem (azadarachtin) or spinosad, which are made from natural ingredients. Insecticidal soaps, neem and other oil products may be effective as both a pesticide and/or a deterrent for soft-bodied insects. Early, immature stages of insects are always more vulnerable to treatment than later stages. Read the labels carefully and choose a product that is labeled for both the pest and the crop.

If you decide to use a pesticide, dusk is a good time to treat for active pests, for three reasons:

All eat leaves or fruits of plants in vegetable gardens. Symptoms include:

To help determine what vertebrate animal is causing the damage, sprinkle a layer of finely ground limestone around the damaged plants and look for animal tracks left in the powder the next day.

Rabbit damage can be identified by foliage that has been nipped off sharply, leaving no ragged edges. Seedlings might be grazed to the ground, and new growth uniformly nibbled off. Look for pea-sized droppings in the vicinity. Rabbits don’t travel far from their burrows or resting places. They feed at dusk, in the night and early morning. They favor tender beans, beets, broccoli, carrots, lettuce and peas. Deer damage can be easily confused with rabbit damage, but usually large parts of plants are chewed off and deer tracks will be evident in the soil.

Voles damage seedlings by chewing leaves and stems. Vole damage can be confused with cutworm damage because voles will move down a row of seedlings eating just the stems and toppling plants. Or, they might nibble only on the leaves. They feed mostly at night. Look for vole tunnels in grassy areas at the edges of the garden. Voles stay close to their tunnels and sometimes tunnel right into the garden. Problems are more likely to occur when vole populations are high.

Woodchucks tend to trample plants as they feed. They feed close to their burrows during the day, especially in mid-morning and late afternoon. Like rabbits, woodchucks seek shelter in weedy areas, stonewalls, brush piles or under porches and outbuildings. They like corn, beans and peas, but will browse on many tender garden vegetables.

Chipmunks and squirrels may develop a taste for fruits, such as tomatoes or strawberries, more often than the leaves of vegetables. Watch your garden in early morning and at dusk for rodent activity.

To deter mammals, fencing or repellents can be used. A fence that is installed correctly and well maintained will deter many vertebrate pests, with the exception of birds. Different animals require different types and patterns of fencing for success. Electric fencing, at different heights and often in combination with other types of fencing may be required for certain animals. Because of the investment in labor and expense for fencing, plan ahead carefully. In general, proper fencing is the best way to protect your garden from vertebrate wildlife.

Depending on how many nuisance animals live near your garden, as well as their habits and preferences, repellents might be useful. Repellents must be applied frequently, consistently and after rain. Experiment with different kinds of repellents and rotate, or change, the type used. Animals tend to become less sensitive, over time, to the effect of a particular repellent. Ingredients in repellents may include animal predator urine, blood meal, garlic, sulfur or hot pepper, among others. Read the labels carefully and follow the directions.

Other Vertebrate Pests in the Garden

Raccoons are notorious for raiding the corn patch the night before you planned to pick your first succulent ears. First, try to be absolutely sure that no source of food, such as pet food, compost or garbage is accessible to raccoons in your neighborhood. Eliminate potential den sites in stonewalls, woodpiles, outbuildings or porches. Ordinary fences will not deter raccoons. Electric fences, properly installed, may deter them.

Birds will pull sprouted seeds of corn, peas and beans out of the ground. Row covers placed over vulnerable, newly seeded crops will deter birds. As for other animals, repellents (including “scare” tactics) have limited long-term value.

In Massachusetts it is illegal to trap and then transport animals to another location. For information on legal means for managing nuisance animals consult the Massachusetts Division of Fisheries and Wildlife.

Effective management of pests depends on accurate identification of what is causing damage. Once you know what pest is eating your vegetables, you can choose the best option for control. Consider cultural methods, habitat management, handpicking and barriers as a first line of defense. If you choose to use a pesticide select a material labeled for both the pest and the crop. To learn to identify pests and to find photos of some of the pests mentioned in this article, go to www.google.com and enter search terms for the plant and/or the pest, then click on images.