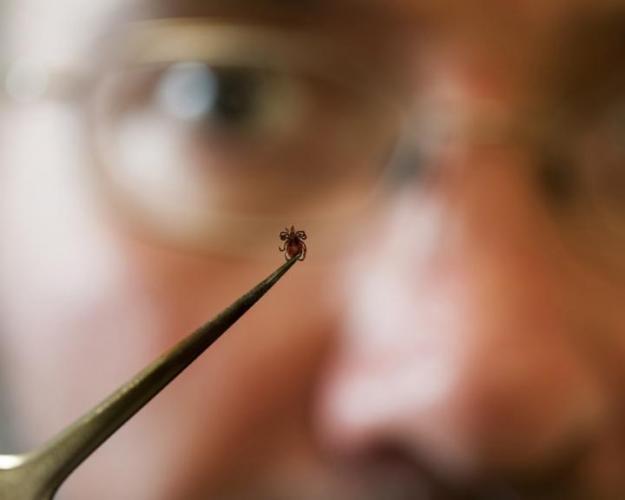 Do you know where to find the biggest concentration of ticks in Massachusetts?  That would be at the University of Massachusetts Amherst’s Laboratory of Medical Zoology (LMZ), or TickReport, as it is better known on the flagship campus and across the U.S.  Steel counters are teeming with dead ticks in plastic bags, all lined up to test for a variety of disease-causing pathogens, such as Lyme. If you want to test ticks that have attached to your body, it is easy, just click here to learn proper removal and how to package it up and send it in: Tickreport.com.

LMZ Director Stephen Rich has become synonymous with expeditious, high-quality tick testing. For 13 years, his laboratory has developed a track record of thorough testing with results provided in 72 hours. Other states offer tick testing facilities, but the prestigious UMass laboratory has earned a reputation as one of the best in the country, receiving these eight-legged critters from nearly all states as tick awareness has increased. Rich says, “More deer means more ticks and more ticks mean more disease. You have basically up to 24 hours in the case of Lyme disease to pull the tick off and prevent exposure. Tick testing is the best way to gain information on the risk of human exposure to infected ticks.”

Over this past winter, Californians were shipping in the eastern deer tick’s west coast cousin, Ixodes pacificus, a vector of Lyme in western states. Paul Killinger, LMZ laboratory communication coordinator, indicates they are currently on par for 2019 with about 600 ticks being sent in every week. He expects that number to double by late May. The lab has averaged over 13,000 submissions per year since 2018.  Their mantra is, “A piece of data is peace of mind.” Indeed.

George Monks, a dermatologist from Oklahoma, created a website, Testmytick.com and works with UMass to raise awareness, educating others about tick-borne illnesses. Monks has produced a number of creative educaitonal consumer products, such as playing cards where the joker juggles ticks and each card shares a tick fact.

If you have not been paying attention for the last decade, you need to give a serious boost to your personal tick knowledge. The range of different types of ticks have spread up to New England over the past 10 years. They can cause a multitude of health problems, and some are even fatal.
Cape Cod Collaborative Extension Entomologist Larry Dapsis has offered tick disease prevention programs for eight years on Cape Cod. Each year, he provides over 80 workshops and events with up-to-date information including: schools, garden clubs, health fairs, town conservation days, libraries and anywhere he can educate residents. As a people-person, this provides vital information, but can be demanding.

In an effort to spread tick education more efficiently, he wrote and stars in a 10-part educational video series called, TICKOLOGY. This series includes everything you ever needed to know about ticks (but did not know who to ask).  Dapsis reviews the kind of ticks you may encounter, what to do about them and tosses in some cool facts. For example, it is a myth that ticks die in the winter. Did you know they produce glycerol (we know it as antifreeze)? This has helped them survive cold winters for thousands of years. Who knew?

More Tick News You Can Use

•    The amount of ticks is reasonably steady, neither increasing or decreasing since 2018.  However, precipitation patterns with increased humidity increase your risk since ticks are moisture-seeking.

The Asian long-horned tick not normally found in the Western Hemisphere, was reported for the first time in the United States in 2017.  As of March, 2019, they have been reported in NJ, VA, PA MD, NY and now CT. We are waiting for appearance of Asian long-horned in Massachusetts.
They pose a special problem for livestock.  If you purchase llamas, foals, goats, cows or other animals from out of state, check them immediately for this tick, whose color is red-rusty brown. If you find one, have it identified. Females can produce eggs without mating, therefore, thousands of ticks may be found at a time on one animal. In other countries, bites from these ticks have made people and animals seriously ill. If your animal has been found with them, work with a veterinarian to treat it.

What is it? Permethrin is a synthetic form of the naturally-occurring insecticide, pyrethrum, which comes from a particular type of chrysanthemum. It is very effective on shoes and socks since the likelihood of contracting Lyme disease is in the late spring and summer when ticks are in the nymph stage (the size of a poppy seed) and hard to detect. You should never apply permethrin directly to your skin it should applied in a very well-ventilated space (or outside away from bees) where it can rapidly dissipate. Also be aware that permethrin is very toxic to cats and aquatic life.  Dapsis found that if a tick is exposed to a treated surface for 60 seconds, it is guaranteed to die. See Tickology video video 4 for proper use of this product.
Since last year, there has been an “up-tick” in the use of permethrin on Cape Cod. Some garden centers are frequently out-of-stock more than they are in-stock with reports that some customers visit their stores specifically to purchase permethrin.
•    The need to test dog ticks is low (no pathogens were found in any that were tested on Cape Cod in 2018).

•    Only female deer ticks (with a red or orange backside) and nymphs are likely to transmit disease to humans or pets. All ticks can carry pathogens, but adult males (all black in color) do not feed and thus do not spread disease.

•    Test deer ticks only if attached or if they have been attached. The risk of transmission is low if it has been on your body less than 24 hours, but not zero.  Some researchers have found when the tick attaches, bacteria is already present in their salivary glands and it can begin to infect the person.

•    Deer ticks are typically found at the edges of the yard that are shady and moist.  Open lawn with bright sunlight is a hostile environment so they are not found there. 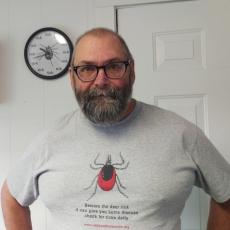