Impatiens Downy Mildew is a new disease in home gardens that kills garden impatiens. The first signs of this disease are leaves that are slightly yellow or off color (not to be confused with lack of fertilizer). Next, the undersides of the leaves will have white-colored powdery-like spores. Sometimes it is difficult to see the spores without a magnifying glass. Eventually the leaves and flowers will drop off of the plant, and leave bare stems with only a few tiny, yellow leaves remaining. This disease only affects garden impatiens (Impatiens walleriana), including double impatiens, ‘Fusion’ and mini impatiens. This disease will not kill any other plants. New Guinea impatiens (Impatiens hawkeri) and SunPatiens® are not affected.

Plants with this disease should be removed, roots, soil and all, bagged and disposed of. Fungicide sprays do not work on this disease! Do not compost or depend on fungicides. This disease can overwinter in the soil and is also spread on wind currents. For a fact sheet with pictures see “Impatiens Downy Mildew in Home Gardens” Alternative shade-loving plants can be safely planted such as New Guinea Impatiens, begonias, lobelia, torenia and coleus.

Research has shown no evidence of seed-borne transmission. Young plants, seedling cotyledons, and immature plant tissues are most susceptible to infection; leaf symptoms are often first observed on the younger growth. Plants infected at an early stage of development may show marked reductions in growth and leaf expansion.

Two types of spores are produced that can initiate disease infection.

A few species of wild impatiens are also hosts of this disease, but there are no other known hosts. New Guinea impatiens (Impatiens hawkerii) is highly tolerant to this downy mildew. See FAQs for Landscapers in the references below.

Favorable Conditions: Development and expression of impatiens downy mildew is highly influenced by the weather.

The disease was noticed late in the season in several locations when night temperatures began to drop into the 50s in early September. Downy mildew is a water mold. As the name implies, it likes and requires moisture to sporulate and cause new infections. Plants in heavily shaded locations where the leaves stay wet for extended periods of time will generally have a higher incidence and severity of disease because moisture promotes infection and disease expression.

Disease tends to be worse in:

Diagnosis: Growers should be on the lookout for impatiens downy mildew and advise landscape customers to do the same.  Send samples for confirmation to your state diagnostic lab.

Infected plants should be pulled, roots, entire plants and leaf debris, and the area should not be replanted with susceptible garden impatiens species. Infected plants will not recover. Fungicide treatments will not work on infected plants. All infected impatiens should be pulled from the site, bagged and destroyed.  Do not place in compost piles. Allowing infected plants to remain in the landscape may allow the pathogen to overwinter as resting survival spores (called oospores), which may infect impatiens planted next year or longer.  New Guinea impatiens types, coleus, begonia, or other available bedding plants are safe to reset in the affected area.

Impatiens DM can occur in beds with no history of the disease on healthy plants if wind-dispersed spores blow in from other locations. Impatiens DM is not known to be seed borne, but healthy seed propagated plants can become infected from these wind-blown spores. It can take from 5 days to 2 weeks after inoculation before plants show symptoms, depending on environmental conditions.

Remove and dispose of any infected Impatiens walleriana plants (standard impatiens, double impatiens) as well as all nearby impatiens plants. When discarding the plants, bag and remove the entire plant including the soil and any plant or soil or leaf debris; do not compost. Evidence so far indicates that New Guinea impatiens Impatiens hawkeri are not affected by DM. It is important for growers to remove infected plants early before oospores develop.

Impatiens DM is not known to be seed borne, so if possible, keep seed and vegetative impatiens in separate greenhouses in the future to prevent cross contamination. However, the young leaves (cotyledons) are very susceptible to infection.

Being a new disease to our area, there is not a lot known about overwintering, re-infecting plants the next year, or persistence in the soil. Therefore, growers and landscapers are advised to practice prevention. Remember the disease triangle - susceptible host, pathogen and right conditions are needed for the disease to develop.

There are fungicide programs that have been developed for greenhouse production. Below is a link to one developed by Colleen Warfield, Ball Horticultural Co. and others developed by M. Hausbeck (Michigan State University) and M. Daughtrey (Cornell University). While fungicides can protect healthy plants during the production stage, once plants are planted outdoors in landscapes, Impatiens downy mildew can infect plants from wind-dispersed spores blown in from other locations or from overwintering spores if planted in infected beds.

According to trials conducted by Colleen Warfield, Plant Pathologist, Ball Horticultural Co., fungicides can provide very good to excellent control of impatiens downy mildew when applied as foliar sprays to healthy plants only, prior to inoculation in repeated trials. However, fungicides were much less effective applied only 3 days after inoculation. 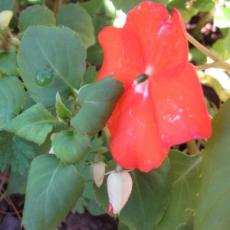 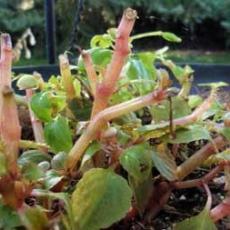