The spotted lanternfly looks a bit like a souped-up, dramatically winged alternate-universe cousin of a ladybug. Its name sounds downright quaint, and it produces honeydew, certainly a poetic-sounding substance. But all that poetry doesn’t quite reveal the truth of the insect, especially in the United States. It’s an invasive species here, and one that can do a lot of damage to plants, including at vineyards. And that honeydew? Tawny Simisky, of UMass Extension, describes it as “sugary liquid excrement.” So not really what you want falling from your trees at the next backyard picnic.

Because of the damage it can do and the lack of natural enemies that would control its numbers, the spotted lanternfly is the subject of management efforts by the state. Simisky is an entomologist for UMass Extension, and a member of their landscape nursery and urban forestry program. As an Extension educator, she specializes in the study of insects in relation to woody ornamental plants -- trees and shrubs that are planted in managed landscapes -- and teaches continuing education for adult landscaping professionals.

What Does “Invasive” Mean?

“Invasive,” when it comes to flora and fauna, just means something that’s not native to a place. With many native pest insects, Simisky says, “we have a complex of predators and parasites and fungi or viruses that regulate populations and keep them below damaging levels.” But those things don’t always affect non-native species. “Things like spotted lanternfly or the emerald ash borer find suitable food and have plenty to feed on, but really no organisms locally that have co-evolved with them to help reduce their populations.”

In 2021, the Massachusetts Department of Agricultural Resources (MDAR) confirmed the presence of an established spotted lanternfly population in Worcester County. “Since [and even before] then,” Simisky says, “we've had detections of the insect across the state.” In most cases, she explains, these sightings involve dead individual insects (for instance, in potted plants), so there is not yet concern about more widespread infestations. “Right now, we consider the population of spotted lanternfly confined to some small, discrete areas of Fitchburg, but since 2021, it’s also been detected in Shrewsbury, [which is] also in Worcester County.”

At the time of this interview, the known distribution of established populations of the spotted lanternfly in Massachusetts mentioned above was accurate. However, by the time of publication of this article, a new population of spotted lanternfly has been detected in Hampden County, Massachusetts in the city of Springfield. MDAR officials announced this detection in early August of 2022 and are urging the public to be on the lookout and report sightings of this pest, especially if they live in the Springfield area. For more information from MDAR, please visit: https://www.mass.gov/news/state-agricultural-officials-ask-residents-to-report-sightings-of-the-invasive-spotted-lanternfly .

The Problem with Lanternflies

Simisky says the chief problem with spotted lanternfly is that the insect “uses piercing, sucking mouthparts to remove fluids from its host plants. So, it’s feeding on the sap running through the trees and shrubs, and it feeds on massive quantities of that liquid, and then excretes it as honeydew.”

Honeydew can be an issue in several ways: The first is direct and obvious:  it accumulates into a sticky mess underneath trees where spotted lanternflies live. But secondarily, honeydew frequently becomes a host for black sooty mold, a fungus. Along with all of that unpleasantness, Simisky says, “stinging insects like ants, bees, and wasps are attracted to that sugary liquid. And then there’s potential for particularly the adult spotted lanternflies to congregate in backyards in massive numbers. So, think about having a tree next to your kids’ swing set that's covered in hundreds, if not thousands, of these insects.”

The spotted lanternfly can, in short, be a huge nuisance for anyone trying to simply enjoy their backyard. “And that's been the experience of a lot of landowners in Pennsylvania, where it was first detected in the United States in 2014,” Simisky says. “We're nervous about that aspect. But also, it has a tendency to feed on some agriculturally important crops – not just ornamental trees and shrubs, but also grape[s],” which has affected vineyards in Pennsylvania. Simisky adds that the spotted lanternfly can impact stone fruits like peaches and plums, and to a lesser extent, apples.

Next for the Lanternfly

Of course, it’s hard to predict exactly how things will play out with any invasive. In the case of the spotted lanternfly, the answers may be different in different part of Massachusetts. “Scientists have done studies looking at temperatures and climate to see where in the U.S. would be most suitable for spotted lanternfly to establish, and much of Massachusetts is considered climatically suitable for this insect,” Simisky says.

Locally, things are potentially a bit worse, Simisky says. “Unfortunately, the Pioneer Valley is a little bit more favorable for this insect than other parts, like say the Berkshires. We have a bit of a warmer location in the state. It is expected that this insect could establish itself in much of the state. We certainly have the host plants that it favors available. This insect will feed on about 103 different hosts, in addition to what I've mentioned previously.”

UMass Extension, she says, has joined extension programs across the U.S. in “trying to keep up with the learning curve and give the best insect management advice for landowners, professionals, and agricultural producers.” 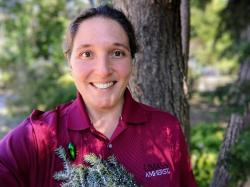 For most people, the important takeaway is that spotted lanternfly is really good at hitchhiking and being accidentally transported, Simisky says. “Usually, it's the egg masses and the adults that different states have been finding on infested nursery stock, or just adults climbing into vehicles and people going on vacation somewhere and accidentally bringing them back. A lot of what we're seeing is new infestations on trade routes or commerce routes, where there's a lot of trucking.”

Despite that tough-to-combat route of spread, UMass Extension and MDAR have worked to increase awareness and slow the spread in other ways. This spring, the Department of Agricultural Resources requested that purchasers of trees or shrubs, particularly growers and landscapers, look out for spotted lanternfly egg masses, adult insects, or nymphs, and report any they find in Massachusetts on MDAR’s Introduced Pests Outreach Project page.

How Scientists Hope to Control This and Other Species

In the meantime, scientists hope to find predators or parasitoids that will help with controlling this new insect population. That work includes surveys to see if native birds will feed on them. “Right now,” Simisky says, “we don't have evidence to believe that those native predators will put a significant dent in the population and reduce it below damaging levels. Scientists are working on finding a biological control option for spotted lanternfly, including some researchers on Cape Cod. But they have not yet found something suitable in the spotted lanternfly’s native range, which includes China, India, and Vietnam.”

That work is complicated by the necessity of avoiding unintended consequences: any newly introduced predator or parasitoid must only feed on spotted lanternfly. That means such efforts take a lot of time and study.

That kind of study is what these scientists do, of course, and their current efforts include other invasive species; spotted lanternfly is just one of the newest. In Massachusetts right now, insects of concern also include the emerald ash borer. First detected in the state in 2012, the emerald ash borer is a wood-boring beetle that’s killing ash trees in Massachusetts and much of the US. Worcester County is experiencing an infestation of the Asian longhorned beetle, which damages a variety of native trees and shrubs, but particularly impacts maple trees.

“The Asian longhorned beetle has been here since 2008, in Worcester and some surrounding communities,” Simisky says. “That insect impacts 12 genera of native trees and shrubs. But what gets the most attention is that our maple trees are favored by this beetle. And it’s managed in a much different way than something like spotted lanternfly.” The good news is that slowing the spread of the Asian longhorned beetle may prove somewhat simpler, in certain ways, than spotted lanternfly. It’s managed through eradication, which is only possible, Simisky explains, because the insect “stays very close to the trees that it emerges from, and it doesn't really move around too easily [on its own].” Eradication of the spotted lanternfly from the US, on the other hand, does not currently seem possible.

One potential route of spread is what necessitates the signs you might notice at state parks about never bringing in your own firewood, as doing so can spread many kinds of insects, including invasive species.  However, the problem of invasive insect spread may extend beyond moving firewood. This is especially true of the spotted lanternfly. “In the infested areas, they gather in the adult life stage in large groups, and they can lay their egg masses on almost any flat surface. So, with not only host plants, but also stones, fencing, and even outdoor furniture, you could accidentally move egg masses around that are stuck to those materials.”