Varroa Mites Feed on Fat Body Tissue and not Hemolymph 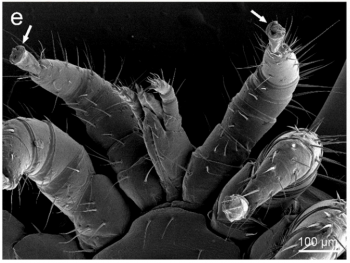 Researchers from the University of Maryland showed that Varroa mites feed on honey bee fat bodies and not hemolymph. Sam Ramsey spoke about this research at the MassBee Fall Conference, so it may not be news to many of you, but this is a HUGELY IMPORTANT paper, overturning a 40-year old assumption and changing the way we think about the relationship between honey bees and Varroa mites. If you missed Sam’s talk, you can watch a short video here. You can read the full study here.

Why did they conduct this research?

For over 40 years we’ve assumed that Varroa mites consume hemolymph. However, there are a lot of reasons to question this assumption: hemolymph has a low nutrient content, the Varroa digestive system is not adapted to fluid-feeding, and hemolymph-feeding doesn’t explain many of the effects of Varroa (reduced immune function, reduced pesticide tolerance, shortened lifespan).

What did they do?

1) The researchers observed where mites feed on bees. 2) They took high resolution photos of the feeding site. 3) They marked bee organs (fat body and hemolymph) with fluorescent markers to test which organ Varroa are eating, and 4) They fed Varroa hemolymph or fat body and watched how long the mites survived.

What did they find?

1) Varroa consistently fed in one spot, on the underside of the abdomen, suggesting that they feed on fat body not hemolymph. 2) The wound site showed evidence that Varroa mites feed during transport on adult bees. 3) The fluorescent markers showed that Varroa consume fat body tissue and not hemolymph. 4) Mites fed fat body survived longer than mites fed hemolymph (mites fed hemolymph fared no better than mites fed nothing). In short: Varroa mites feed on fat body tissue.

This discovery has huge implications for Varroa research and control. Fat body tissue detoxifies harmful compounds, plays a role in bee development, and synthesizes and stores proteins and fats (including antimicrobial compounds and wax precursors). This research explains why Varroa infested bees have a lower pesticide tolerance, lowered immune response, lowered ability to store protein and synthesize fat, and earlier foraging. It suggests that it is important to treat for Varroa as early as possible to have healthy bees going into winter! This discovery will hopefully pave the way to new Varroa control mechanisms.