The University of Massachusetts Amherst
Pollinators

If you think you have a honey bee swarm in or near your home...

There is no bee club in Hampshire county, so if you are located near UMass, use the Franklin or Hampden county swarm removal lists.

Before calling a beekeeper, PLEASE confirm that what you have is a honey bee swarm - NOT bumblebees, carpenter bees or yellow jackets. See below for more information.

If you have another type of flying insect (such as bumble bees, carpenter bees or yellow jackets)...

You will unfortunately need to call a local pest exterminator.

If you feel bad about harming pollinators (but understandably don’t want them near your home) plant some bee-beneficial plants to support pollinator health!

How can you tell if you have a honey bee swarm...or something else?

Many people don’t like to get close enough to identify what kind of insect is clustering near their home. However, it is important to know whether you have honey bees or some other kind of flying insect (carpenter bees, wasps, etc.). If you have honey bees, then you can call a beekeeper to take them and give them a new home. If you have another type of insect, they will unfortunately need to be killed by an exterminator.

Luckily, you don’t need to get close-up to identify a honey bee swarm. There are lots of clues that you can identify from far away. But first, what IS a swarm? 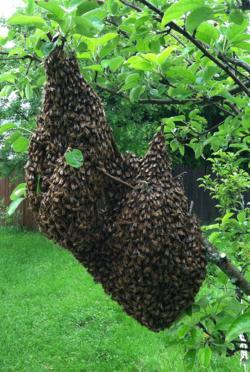 What is a Honey Bee Swarm?

Honey bee colonies reproduce though a process called swarming. In the spring and early summer, when the conditions are right, the old queen and two-thirds of the workers will leave the hive to find a new home (leaving behind a new queen and the remaining workers). They will gather on a tree branch or other object for several hours to several days while they scout out a new nest site. This cluster of bees is called a swarm.

Bees are typically very gentle while they are swarming – so don’t be alarmed! But don’t approach closely unless you have protective gear or are familiar with bees.

Here are some tips to help you identify a swarm from far away: 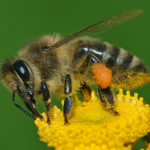 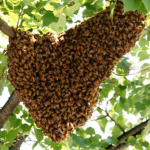 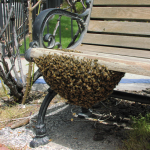