It’s Been a Long Journey for Wild Tomatoes

One of the best tastes of summer is a fresh, right-off-the-vine juicy tomato. Like a kid before the holidays, we wait with anticipation for that first bite of a “tomato that tastes like a tomato.” We chomp down with an eagerness usually reserved for the Thanksgiving turkey with its lavish accompaniments. However, just as the first Thanksgiving turkeys probably didn’t taste exactly like the ones we buy at the supermarket today, today’s tomatoes have come a long way from the ancestral wild tomatoes of South America. One biology lab at UMass Amherst is looking way back to try to see the future of a “tomato that tastes like a tomato.” 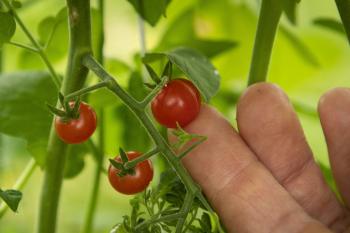 Although tomatoes are botanically a berry, a kind of fruit, these round red (or orange) delights are considered to be vegetables for culinary purposes because of their savory flavor. Any way you cut it, slice it, or dice it, it is an unusually versatile fruit. Tomato festivals, romps and tastings are held in over half of all US states and internationally. Ira and George Gershwin even immortalized the dual pronunciation of tomato in their 1937 song, Let’s Call the Whole Thing Off, “…You like tomato and I like tomahto.”  So what more can we possibly learn about them? Turns out, a lot.

Pests, environmental stress, and diseases have plagued this fruit for millennia.  Early and late blight, blossom drop and Anthracnose, along with other common fungi and abiotic stresses (blossom end rot and yellow shoulder) are some of the many issues challenging the noble tomato.

That perfectly red tasty summertime tomato is not a tomato grown in its ancestral state.  If you were to turn the clock back about 6,000 years and pluck a tomato off the vine prior to human efforts to domesticate it, you might wind up in Ecuador or Peru eating small wild tomatoes. Technically, the direct wild ancestor of cultivated tomato is Solanum pimpinellifolium.  These little fruits are a close relative of the modern ones you pick up at farmer’s markets, in your CSA bag or in grocery stores, but they are much much smaller, like a very tiny cherry tomato. Today, some of our large red domesticated tomatoes (such as ‘Iron Lady’, and ‘Defiant’) have been genetically selected for disease resistance  but don’t always have the best flavor or texture. Is there an opportunity to select traits for disease and pest resistance while improving flavor and appearance?  Professor Ana Caicedo and PhD student Jake Barnett think there very well may be.

A Mother and Child Reunion?

The evolution of wild tomatoes have captured the interest of UMass Amherst graduate student Jacob ‘Jake’ Barnett. His summer research in 2019 has taken place in a new high tunnel greenhouse at the University’s Crop and Animal Research and Education Farm in South Deerfield. Barnett is particularly interested in two topics: the viability of growing South American tomatoes in Massachusetts and their insect resistance.

So how do you obtain, plant and study wild seeds that are becoming harder to find in the wild? Barnett contacted a seed bank at University of California Davis, well-known for its collection of wild species and of mutants used for research. Starting in the 1940s, an especially forward-thinking researcher, Charley Rick, gathered and stored seeds of wild tomato species, all native to South America. These ancestral tomato species collectively possess genes that provide natural genetic defenses against pests or abilities to tolerate various types of stress.  After thousands of years of breeding, our domesticated tomatoes, bred for color and size, have lost their natural ability to resist pests. Barnett, working with Professor Caicedo, has filled the high tunnel with 280 healthy tomato lines he grew from 40 varieties of seed.

Caicedo is the ideal researcher to advise Barnett because of her long-standing interest in the attributes of these wild plants. In 2003, she received her PhD from Washington University in St. Louis, where her research focused on population genetics of disease-resistance genes in wild tomatoes.

Barnett’s goal is to survey wild tomato species and two commercial varieties, evaluating their ability to grow under Massachusetts conditions and their potential resistance to pests and disease.

Biologist or Geneticist? As an evolutionary biologist, Caicedo is both. She explains that domestication is an example of an evolutionary process. Starting with wild plants, humans exert selective pressure on these, often for appealing traits, and after many generations end with domesticated plants. Starting with one thing and ending with another …that is evolution and it is her passion. For evolutionary change to occur, there have to be genetic changes throughout the process. An outcome of domestication is that plants become adapted, that is, adjusted, to the cultivated environment. Domesticated plants still need to keep evolving. Climate change is a dramatic example of one of the likely environmental changes to which plants need to adapt.

When researchers ask big questions about how plants have evolved, they connect traits with genetics, that is, the DNA content.  Information from DNA is used to understand how different plant groups and populations are related and how they diversify. DNA also determines what characteristics different plants have.  When asked where tomatoes originated from, Caicedo replies, “All wild tomatoes are from western South America. There are only 13 species of wild tomatoes occurring in different habitats in Chile, Peru, Ecuador and the Galapagos Islands. The Galapagos offer a beautiful example of how diverse tomato species can be; these purely wild species are closely related to the tiny red Solanum pimpinellifolium, but have been separated from them for millennia, leading to many different traits.” Researchers now have the ability to edit desirable genes: you can think of it as using a DNA scissors to cut it out of one variety and insert it in another. It’s like evolution in warp speed.

Why is diversity so important? Caicedo says, “Wild species harbor useful and desirable traits. Some are salt-tolerant which could be very useful as our soils become poorer. Some are drought-tolerant, especially important with global climate change. Cold tolerant species, such as a few wild tomatoes that grow in the Andes Mountains, have begun to be used as root stock.

"One fascinating tomato growing prolifically in South Deerfield features an unusual hairy stem. This species (Solanum habrochaites) makes anti-insect chemicals and is chosen for rootstock because it can also survive in harsh, cold conditions.

"So understanding the various traits that exist and trying to figure out which are useful for growing in the northeast US environment, is another compelling reason for researching wild tomatoes.  We are laying the groundwork for directions we can go.” 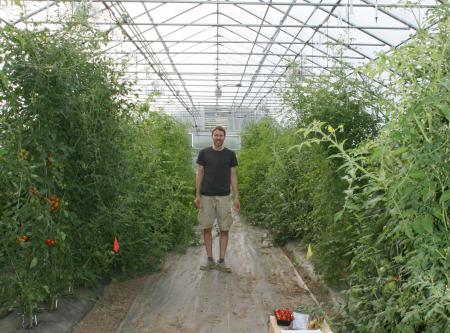 Back in South Deerfield in his high tunnel, Barnett works among thriving tomato plants, nearly twice the height of this tall researcher. Although plants are flourishing inside a high tunnel, the next step will be to see if they can grow outside in a natural environment.  He is working with an array of wild species with different growth requirements from a variety of habitats in South America. Some are adapted to desert conditions, others thrive in extremely cold environments.  Island tomatoes grow with very sparse vegetation, and a handful of species are adapted to forests. Keeping them all happy is not trivial. His research could ultimately prove useful to agriculture in New England.

Barnett is also exploring the production of alkaloids (a category of drugs, like caffeine) in tomatoes. All plants in this family produce alkaloids (the “family” includes potatoes and eggplant).  Of particular relevance is tomatine, the alkaloid produced by tomatoes. Tomatine protects fruits from fungi and Barnett is exploring ways in which tomatine content differs among species and whether or not there is a relationship between the tomatine content in leaves of plants and in their fruits.

Finally, he is assessing how fruit colors have changed during tomato evolution: why some fruits are red, others orange or yellow and some are green when ripe. This may shed light on how seeds are spread by animals (birds are more attracted to red while rodents are to yellow, so seeds are spread differently). Sugar and water content are traits that may affect animal dispersal.

The thread that weaves throughout Caicedo and Barnett’s research is the understanding of tomato diversity and finding other uses for it. For example, disease resistance genes from several wild species have been bred into the cultivated tomatoes we buy in supermarkets. Decades ago, mechanized harvesting of domesticated tomatoes was made possible by breeding of a trait found in wild Galapagos tomatoes that allows fruit to be pulled off the plant without an attached stem.

Caicedo remarked, “I want to know how tomato species have adapted to their diverse environments and become different. Every giant cultivated tomato originally came from adorable tiny tomatoes. I find that fascinating.”  Important tomato research will continue, since it has evolved to be one of the most desirable and commonly eaten fruits. But with DNA research and other technologies available today, it probably won’t take 6,000 years for the next big chapter to be written.