Most turf managers in New England deal with white grubs at one time or another. Grubs, the larval stage of scarab beetles, can cause considerable damage to turf as they feed on root hairs and prevent the plant from taking up adequate moisture. For many years, turf managers assumed that most grub problems throughout interior New England were caused by Japanese beetles. We now we realize there are multiple species of white grubs that can occur in various parts of the Northeast. Several seasons of surveying turf sites throughout Massachusetts have revealed four species of grubs (Japanese beetle, European chafer, oriental beetle, and asiatic garden beetle) to be causing most of the damage we see each year. Another species, the May or June beetle, can be devastating where it occurs, but fortunately its distribution appears to be somewhat restricted.

Each species has slightly different behavior patterns and some are more vulnerable to various management approaches than others. Therefore, it is very important to know how to identify each species in order to effectively select and time control measures.

The posterior end of the white grub has several characteristics that enable us to identify the different species. These characteristics combined are called the "raster pattern". If you hold a grub between your thumb and forefinger, and use a small pin or knife to force the grub to "open up" (i.e., straighten out from its normal C-shape), you can look at the "tail end". Live grubs are not always cooperative, but with practice you can find the features. A small hand lens will help.

Each grub has a slit near its tail end through which it excretes fecal matter. That slit may be "transverse" (curved following the contour of the body), or it may have a Y-shaped branch in it. In addition there are several spines or hairs just in front of the slit. Those spines often have a very distinctive pattern. The combination of the shape of the slit and the pattern of spines is different for each species.

This diagram shows the location of the raster pattern. The arrow indicates the best angle to view it, but it requires patience and a good hand lens to accurately locate it. This is particularly true for smaller species or younger grubs. 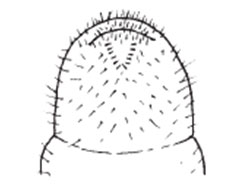 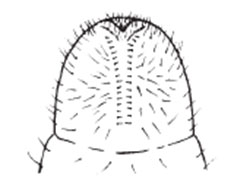 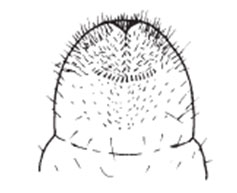 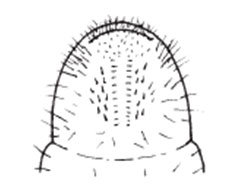