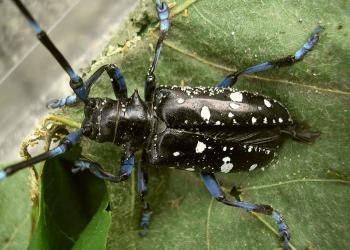 The Asian Longhorned Beetle (ALB) is a relatively new introduction into the United States. It is known to occur in five distinct geographic regions of New York City, several suburbs of Chicago and more recently areas of central and eastern Massachusetts. This pest was positively identified in a small area of Worcester, Massachusetts in August 2008 but is not known to occur in any other New England state. The ALB is a wood borer that attacks live, healthy trees; it’s presence usually leads to the death of the host tree. Homeowners and concerned citizens should be aware if its signs and report any suspicious findings immediately to the proper state, federal or Extension personnel.

The Problem: The Asian Longhorned Beetle was first found in the United States in New York City in August of 1996, infesting numerous Norway maple trees in a specific neighborhood of Brooklyn. To date, thousands upon thousands of trees have been removed from infested areas in New York, Chicago and Massachusetts in an effort to eradicate this pest.  The ALB arrives in this country in wood pallets and shipping crates at points of entry for cargo. Once in this country, the beetles will emerge from the discarded wooden shipping material and seek healthy trees to infest. There have been more than 30 interceptions of this pest, at shipping ports around the nation, since it was first discovered in 1996.