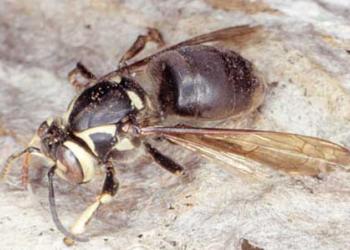 Fall in New England: the leaves turn, apples ripen and the wasps come out. Wasps raise their brood all season long, increasing the size and populations of their nests. At the end of the summer, their nests can be quite large, holding hundreds of wasps. These wasps fly around, foraging for food, including food that people enjoy. People attract wasps. An open can of soda on a warm fall day is an invitation to lunch. So is an open garbage can.

While people complain about "bees" in the fall, the main culprits are wasps, especially yellowjackets and white-faced hornets. Bees, including the honeybee, carpenter bee and bumblebee, gather pollen to feed their young and their bodies are hairy (it helps to collect the pollen). Wasps capture insects to feed their young and have relatively smooth bodies.

Most wasp species are not aggressive. Hundreds of species of parasitic wasps prey only on other insects. Even the large solitary wasps, such as the mud-dauber wasp that builds tubular mud nests, do not defend their nests and will only sting if handled. All bees and wasps are beneficial: they pollinate plants and wasps feed on many pest insects. Control of bees and wasps should only be undertaken when there is a threat of stinging.

Yellowjackets tend to build nests in the ground, but are sometimes found in other protected areas. A mated queen overwinters, starting a small nest in the spring. The brood that she raises become the workers that help her raise more wasps through the summer. New queens and males (drones) are produced in the fall. Yellowjacket nests in lawns and gardens should be controlled, because of the possibility of their being stepped on. White-faced (or bald-faced) hornets, are not true hornets, but are yellowjackets with white markings that produce a paper-covered nest in trees or on sides of buildings. In late summer, these nests can hold nearly a thousand workers. Paper wasps have an exposed nest, without a paper covering. These wasps tend to be less aggressive than yellowjackets and white-faced hornets.

The easiest and safest control for wasps is to wait for winter. Generally, only the queen survives the winter and old nests are not reused. Wasp threats may be reduced by cleaning up fruit in orchards promptly and keeping foods, such as sodas, meat and sweets covered when outside.

If a wasp nest must be destroyed, use a pesticide that is specific for wasps and hornets. Just any "flying insect spray" will not do the job. Read the directions carefully. Wear protective clothing and apply the pesticide in the evening, when workers have all returned to the nest and are calm. When large nests pose a threat, control by a professional pest manager is advised.

Stings from bees and wasps can be life threatening to persons who are allergic to the venom. People who develop hives, difficulty breathing or swallowing, and wheezing or similar symptoms of allergic reaction should seek medical attention immediately. Itching, pain and localized swelling can be somewhat reduced with antihistamines and a cold compress.