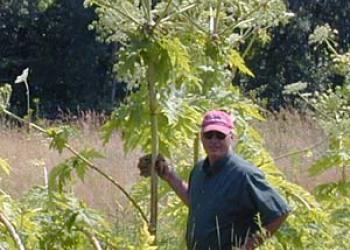 Giant Hogweed was recently found at three sites in Granville, Massachusetts. This is a nasty plant. It is invasive: dispersing through seeds and by spreading roots. When the sap contacts skin and reacts with light, large, liquid filled blisters result. The infestation in Granville was started by an enthusiastic gardener, but now has spread into neighboring areas and along the roadway. It is very likely to be found in other sites in Massachusetts and it should be eradicated.

The Massachusetts Department of Agricultural Resources has a website that collects information on invasives. The MDAR Hogweed report form is at: http://massnrc.org/pests/hogweedreport.aspx

Physical description: A biennial or perennial herb growing 8 to 15 feet tall, giant hogweed usually has a taproot or occasionally fibrous roots. The hollow stems are 2 to 4 inches in diameter with dark reddish-purple splotches and coarse white hairs. The deeply incised compound leaves grow up to 5 feet in width. Hairs on the underside of the leaf are stiff, dense and stubby (only about 0.25 mm long). Particularly characteristic are the short, coarse white hairs at the base of the petioles. The large umbrella-shaped flower heads are up to 2 1/2 feet in diameter across a flat top with numerous small flowers produced in mid-May through July. Plants flower the second, third or fourth year. Some plants are monocarpic and die after flowering; others are perennials and flower for several years. The plant produces flattened, 3/8-inch long oval dry fruits that have a broadly rounded base and broad marginal ridges. Plants sprout in the early spring (or late winter in mild years) from the roots or from seed.

Similar species: A similar related species Heracleum maximum Bartr. (=H. lanatum L. and H. spondylum L. subsp. montanum) (Common name cow parsnip) is often mistaken for GHW. Cow parsnip differs in that it reaches a maximum height of 6 feet. Unlike hogweed, the stem has little or no purple. Hairs on cow parsnip are fine and fuzzy (1 mm long) rather than coarse. Other plants sometimes mistaken for GHW:

Photos and identification information from King County in Washington

Origin and North American Distribution: GHW is a native of the Caucasus, which has been introduced to Europe, Great Britain, Canada, and the United States as an ornamental. It has become established in New York, Pennsylvania, Oregon and Washington State. Reports of infestations have been received from Maine, Michigan and Washington D.C.

Four to five years of prevention of seed production, with treatments to remove adult plants, and appropriate turf re-establishment seem adequate for eradication of a local population
Property managers and cooperators may use these strategies:

Seed heads should be removed to reduce reproduction.. Mowing does not appear to be effective. The Pennsylvania Department of Agriculture (PDA) has used a roto-tiller and planted a lawn seed mix to return previously infested areas to a natural state. The tillage appears to speed up depletion of the seedbank

Glyphosate is an effective herbicide, but it should be used with caution around desirable plants, and is more likely to require multiple treatments: it should also be applied before flowering. The herbicides 2,4-D, TBA, MCPA, and dicamba may burn down foliage, but are not effective in controlling perennial GHW roots. Rodeo (glyphosate) has been recommended for wet areas. Protective clothing should be worn when applying herbicides or removing seedheads. In urban areas, plant materials should be double bagged in plastic, and buried or incinerated in an approved facility.

Other chemical recommendations are available. Contact the Massachusetts Dept of Food and Agriculture at 617 626
1771.

In Switzerland 12 phytophagous insect species found on native hogweed have been identified as possible candidates as biological control. Cattle and pigs are cited as possible biocontrol agents.

Environmental impact: GHW has naturalized in many of the places where it was first introduced. The plants thrive in many habitats but do particularly well where the soil has been disturbed, such as on wasteland, on riverbanks, and along railroads. It prefers moist soil and can quickly dominate ravines and stream banks. It can tolerate full shade, but prefers partial shade to full sunlight. Forest clearings and edges are a preferred habitat for GHW.

Benefits of control: Giant Hogweed is both a public health and environmental hazard, since humans, as well as dogs and other animals may be sensitive to its sap. Furocoumarins in GHW sap cause a skin reaction known as photo-dermatitis or photo-sensitivity. Exposure to the sap in sensitive individuals sensitizes the skin to UV light in sunlight and results in long-lasting swelling, blisters and eruptions of affected sites. Hyper-pigmentation in the affected area may remain for a year or more. In the 1970's, many cases of poisoning were seen in Great Britain where children played with the hollow stems of the plant as pea-shooters or telescopes. In 1998, cyclists complained that contact with "large green plants" left their legs covered in broken and bleeding skin. Contact with the eyes can lead to temporary or permanent blindness.

Information from this article was taken from the USDA APHIS PPQ Noxous Weed Survey Guidelines by A. Tasker.