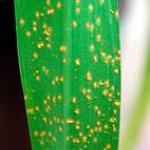 Each type of Rust has its own distinctive symptoms and its own specific plant hosts. The disease often first appears as chlorosis on the upper surfaces of leaves. All rust fungi produce powdery masses of spores in pustules, typically on leaf undersides that are yellow, orange, purple, black or brown. Some Rust fungi produce pustules on upper leaf surfaces as well. Spores are easily spread on air or with splashing water. Lesions may coalesce resulting in large areas of necrosis; leaf distortion and defoliation often follow. 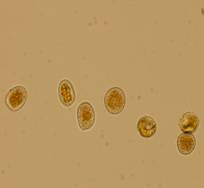 Many Rusts have complex life cycles that include up to five different spore stages at different times of the year and two or more distinctly different hosts. Other Rusts produce only one type of spore or occur in all spore stages on one kind of plant. Fuchsia Rust requires both fir and fireweed to complete its life cycle. Rose Rust produces four spore stages, but only roses are affected. Urediospores ("repeating spores") are produced in yellow, orange, or brown pustules during the summer and spread the disease rapidly. Rusts usually spend the winter as teliospores, which require a dormant period before germination. In the spring, basidiospores are produced from germinating teliospores and start the initial infection. One infection is established, aeciospores are produced, often upon alternate hosts, in cup-shaped bodies that are easily seen. The aeciospores cannot reinfect the host upon which they are produced, only the alternate host, which produces the repeating spores (urediospores) Some Rusts overwinter as mycelium within the tissue of infected perennial plants.

Caused by Uromyces diantha, this rust disease is characterized by small pustules of powdery, brown urediospores. These spores are carried over only on live plants. Resistant cultivars are available.

Fuchsia rust is caused by the fungus Pucciniastrum epilobii and occurs throughout the United States. The most serious losses occur during propagation; diseased plants at any stage are not marketable. Affected leaves may be deformed and defoliation often occurs. Weakened plants may occasionally die. The initial source of spores may be from the alternate hosts, fir or fireweed, especially if plants are kept outside in the summer, or from infected stock brought in from other sources. Photo

Geranium rust caused by Puccinia pelargoni-zonalis is most serious on Florist's geraniums (Pelargonium X hortorum), but has also been reported on zonal geraniums and seedling geraniums. Ivy geranium (P. peltatum), Martha Washington or regal (P. X domesticum), the scented leaf types, and the wild geraniums are resistant. Geranium rust occurs throughout the United States due to the ease with which it is spread on infected cuttings. This rust spends its entire life cycle on geranium (autoecious). Symptoms first appear as small, circular, yellow spots on the top of leaves opposite the pustules on the lower leaf surface. The spots on the lower leaves enlarge to blister-like pustules of rust to cinnamon brown spores which often develop in concentric rings. The purchase of certified, culture-indexed cuttings from a reputable commercial propagator is an important means of disease control. Photo

Unlike most other rust fungi, pustules of Poinsettia Rust caused by Uromyces euphorbiae occur on both leaf surfaces. Spores are cinnamon brown and occur only on living plants.

Rose rust caused by Phragimidium mucronatum first appears in the spring as bright orange pustules on leaf undersides, leaf stalks and branches. In the summer, small raised orange spots appear on the undersides of leaves with small yellow specks on the upper surface beginning on the lower leaves and moving upward. The spots may go unnoticed until the plant begins to exhibit a generally unhealthy appearance and a loss of the lower leaves. Leaves may become dry and twisted before falling off. As the leaves dies, the spots darken and produce the black teliospores that survive the winter to produce new infections in the spring. This disease may be mild or severe depending on the season and how early the infection began. Prune and burn infected leaves, petals, and canes as soon as they are detected. Cultivars vary in their susceptibility to rust diseases.

Caused by Puccinia viola, this rust disease is common in the Northeast. Symptoms first appear as small, pale green spots on the upper leaf surface. As the fungus develops within the leaf, corky spots, blisters, or pustules containing rusty brown spores develop on leaf undersides.