In 2017, the Agricultural Census changed the way it counts the people who run a farm. To better capture the roles of multiple operators involved in decision making, the 2017 Census allowed respondents to identify up to three Principal producers. To bridge the gap between 2017 and previous years, the Census uses a complex statistical edit to identify a single Primary Producer from among the identified principals. This is a change from previous census years, when respondents were asked to identify one Principal Operator.

Figure 5.1 shows the numbers of principal farm operators for the census years 1974 – 2012, and the primary producer from 2017. The census definition of a farm changed in 1974 and prior years are not comparable to the census figures from 1974 to the present. Massachusetts had an increasing trend in numbers of principal farm operators over the period from 1974 – 2012. Figure 5.1 shows that the numbers of principal farm operators/ primary producers who did not identify farming as their primary occupation (part-time farmers) grew faster than the numbers who identified farming as their primary occupation (full-time farmers). From 1974 to 1987, the number of full time farmers grew by 22.4 percent compared to nearly 72 percent for part-time farmers. By 1987, there were nearly as many part-time farmers in the state as there were full-time farmers. Farming saw some adjustments in the following years as changing economic opportunities affected the values of farmers’ time allocations on and off the farm, as well as their hired labor expenses. (The 1997 Census data were adjusted following improvements made in farm coverage through adjustments to farmer lists and nonresponse. We show both the unadjusted and adjusted 1997 figures, but the adjusted figures should be used for comparisons across Census years. (What is a coverage adjustment?) Between the years 2002 and 2007, there was a 26.6 percent increase in the total number of principal farm operators, from 6,075 to 7,691. Of these additional 1,616 principal operators, 75 percent of them considered their primary occupation to be something other than farming and the number of part-time farmers exceeded the number of full-time farmers in the Commonwealth. In 2012, the balance had returned to a virtual tie with 3,878 full-time and 3,877 part-time farmers. Future census years that use the new primary producer definition will allow more robust comparsion to identify whether the trend will continue. 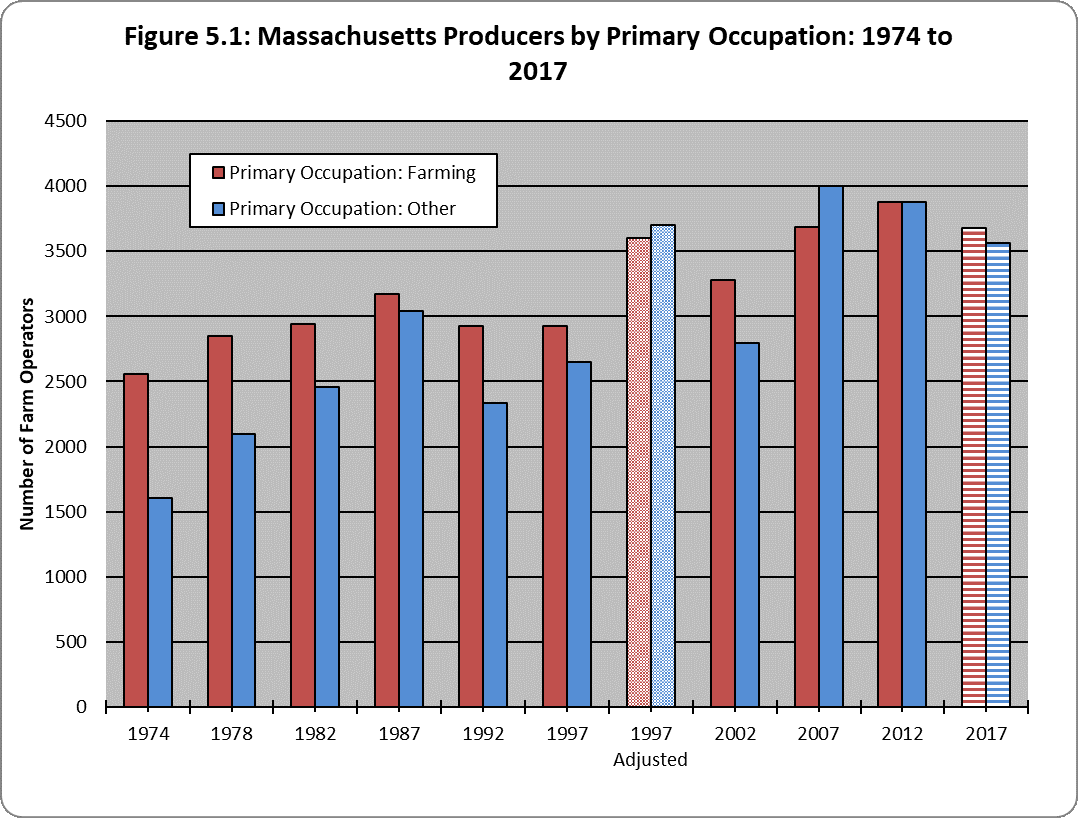