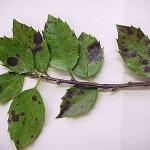 Small to large irregularly shaped yellow-brown spots appear during the winter and spring on old American holly leaves infected with Coniothyrium ilicinum.  Heavily infected leaves drop prematurely from the trees in the spring.  Phacidium species initially causes yellow spots on the leaves of American and English holly by late spring.  During the summer the spots turn red-brown then develop the characteristic black tar spot by early fall.

Leaf spot diseases are more common on American holly, but usually appear during the winter and spring on old leaves.  As a practical matter these fungi have not been studied enough to understand their biology and life cycle.  In fact, there is some dispute about whether Coniothyrium ilicinum is a primary leaf spot disease or a secondary invader of senescing foliage.  On the other hand, Phacidium species is considered a tar spot disease but its biology has not been studied in detail.